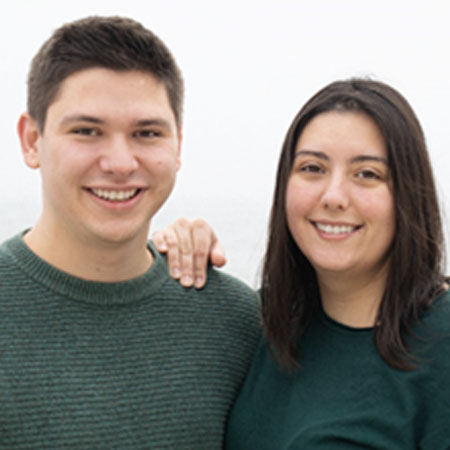 Dmytro and Anastasia Zuiev, from Ukraine with a strong call to Japan.

Dima and Nastya Zuiev are a young couple dreaming big dreams for God. They are from Ukraine and have recently completed a training course at Seaside Missionary Training Center in Odessa. They are now preparing for an eleven-month placement in Japan with OMF. This is the next step in their aspiration to serve God long-term in Japan.

Neither Dima nor Nastya grew up in Christian families. Both came to a saving faith in their teens through the witness of close friends. For both of them, the call to Christ was accompanied immediately by a call to missions. Nastya had been fascinated by Japan since her pre-teen years. However, when she understood how desperately small the Japanese church is, and how few Japanese people give their lives to Christ, she wanted to do something about this.

For his part, Dima’s call was to China. He had read literature about the persecution of the church in China and felt that this should be his field of service. As Dima and Nastya fell in love, they were delighted that they shared a passion for mission, but were concerned that they were called to different countries. After a period of reflection, both ceded the country of choice to the other. Having made this mutual sacrifice, they could then discuss the situation and realised that Japan was the place God would have them serve.

They have already been active in evangelism in Ukraine and beyond. They both volunteer with Campus Crusade for Christ, and Nastya also does online evangelism through Skype. She already has friends in Japan that she shares her faith with over Skype. They are particularly gifted in small group Bible study situations.

They realise that they go to Japan with a love for Christ, and some training and skills. Nonetheless, they know that they are largely unformed and unready to serve long-term in Japan. This initial trip is very much in order to learn and shadow missionaries already in place before they return to Ukraine for further training for a long-term placement.

They are trusting God for their financial provision and are delighted to have already seen nearly 90% of their support come in.

They had hoped to be in Japan by March 2020. This now seems unlikely because of the current pandemic and the length of time it will take to obtain a visa.

During their time in Japan they would also like to attend a short-term training course in Chiang Mai, Thailand, to better understand basic principles of cross-cultural outreach. match4mission is seeking to find funds to help them cover the cost for this.

Next projectMary, called to serve in a sensitive deployment in South East AsiaNext